Traveling to Pripyat with Real Chernobyl

Ride to Prypiat with RealChernobyl

Let us tell you about what happened in Pripyat, Ukraine. Before the Chernobyl disaster, the city was a pride of the Soviet Union. On 26 April in 1986, 2 km from Pripyat, an event happened that changed the future history of mankind - the explosion at the Chernobyl nuclear power plant. This disaster turned consciousness and radically changed the perception of the environment, science, and new technologies on our planet. The significance of the Chernobyl disaster is difficult to overestimate. This is an unprecedented case, the consequences of which are still working scientists from all around the world.

For more than 30 years, attention to this topic has not diminished, and the recent successful opening night of the Chernobyl tv series has excited the whole world and caused a new surge of interest in the accident and the place where it happened. Trip to Pripyat is something that every

Pripyat began to build in 1970 for workers because of the construction of one of the largest nuclear power plants in Europe. This city was the largest, hopeful, and town-building city in the USSR. Pripyat was an example of a new urban progressive nuclear city – green parks, huge sport gym, the newest palace of culture, the most convenient hotels, the first store, the first 16 floor buildings – everything matches to one of the most powerful atomic advanced city in the USSR. There are many skilled workers of power plants lived with their families, proud that their city was considered one of the "youngest" city in Ukraine: the average age of its inhabitants did not exceed even 30 years. Pripyat was different from other Soviet cities due to the composition of the micro districts that were placed around the city center. According to the latest census in 1985, the population was 47.5 thousand people, 27 nationalities, but today its number hardly could be enumerated to 5 thousand.

Today, 34 years after Сhernobyl disaster, Pripyat has become an open-air museum of the Soviet Union. This is a place where you can immerse yourself in the USSR epoch.

Nowadays Pripyat is a ghost town. The failed roofs of single-story brick houses, broken windows, and creaking shutters from the wind are like a scene from a horror movie.

"People will never be able to live here again - this is impossible - even after 24 thousand years," said Anna Vronskaya, Minister of Ecology of Ukraine in 2017.

Today, some tour agencies give a possibility to see the place where those dreadful events happened. Before going on tour to Pripyat, you should know that Pripyat is safe to visit if you are wearing clothes that cover all your body and staying in the zone no longer than a few days. Also, you can visit the places that the TV serial "Chernobyl" has mentioned.

The city is a dumb witness of how the lives of its inhabitants were divided into “before” and “after” on April night of 1986. Empty streets, broken windows of houses, abandoned apartments with old photographs on the walls, trees on the roofs of skyscrapers - this is how it looks now.

This park is one of the most popular attractions in Pripyat. Abandoned alleys sharply emphasize the contrast between the past and the present. The opening of this park was scheduled for May 1, 1986, but it would never receive his guests. The Ferris wheel, on which no one had ridden, became one of the symbols of both Pripyat and the exclusion zone. 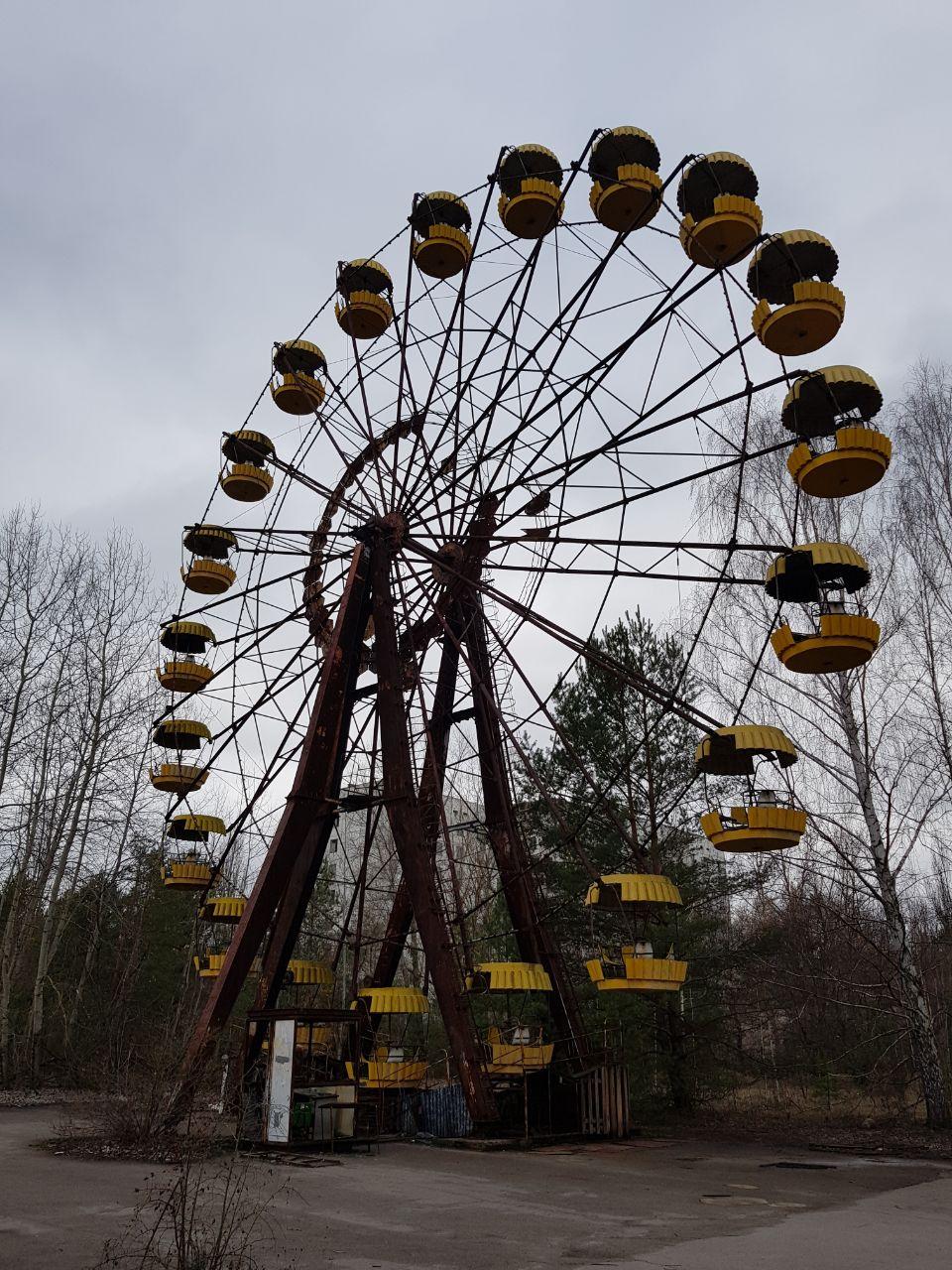 The Lazurny pool was very popular among residents of Pripyat in those days. Its main feature is that even after the Chernobyl disaster, he worked until 1992. The services of the pool were used by local workers and liquidators because this place was the “cleanest” in terms of radioactive background. Nowadays the Lazurny pool is completely abandoned.

The hospital № 126 of Pripyat is known for the fact that it was here that the first workers of the station and firemen, who suffered from the Chernobyl accident, came.

Separate chambers and rooms are ideal for shooting sci-fi thrillers on the theme of life in the world after the human era. Besides, there is always a direct connection with history and specifically with that terrible night of April 26, 1986, when the first victims from the station were brought to the hospital. In the basement of the hospital, there are still things of firefighters who participated in putting out the fire on the roof of the 4th power plant.

The famous attraction of the exclusion zone is the DUGA-1 radar station, which was designed to track the launch of missiles from the United States during the Cold War. Today it is one of the most favorite places to visit and photograph. 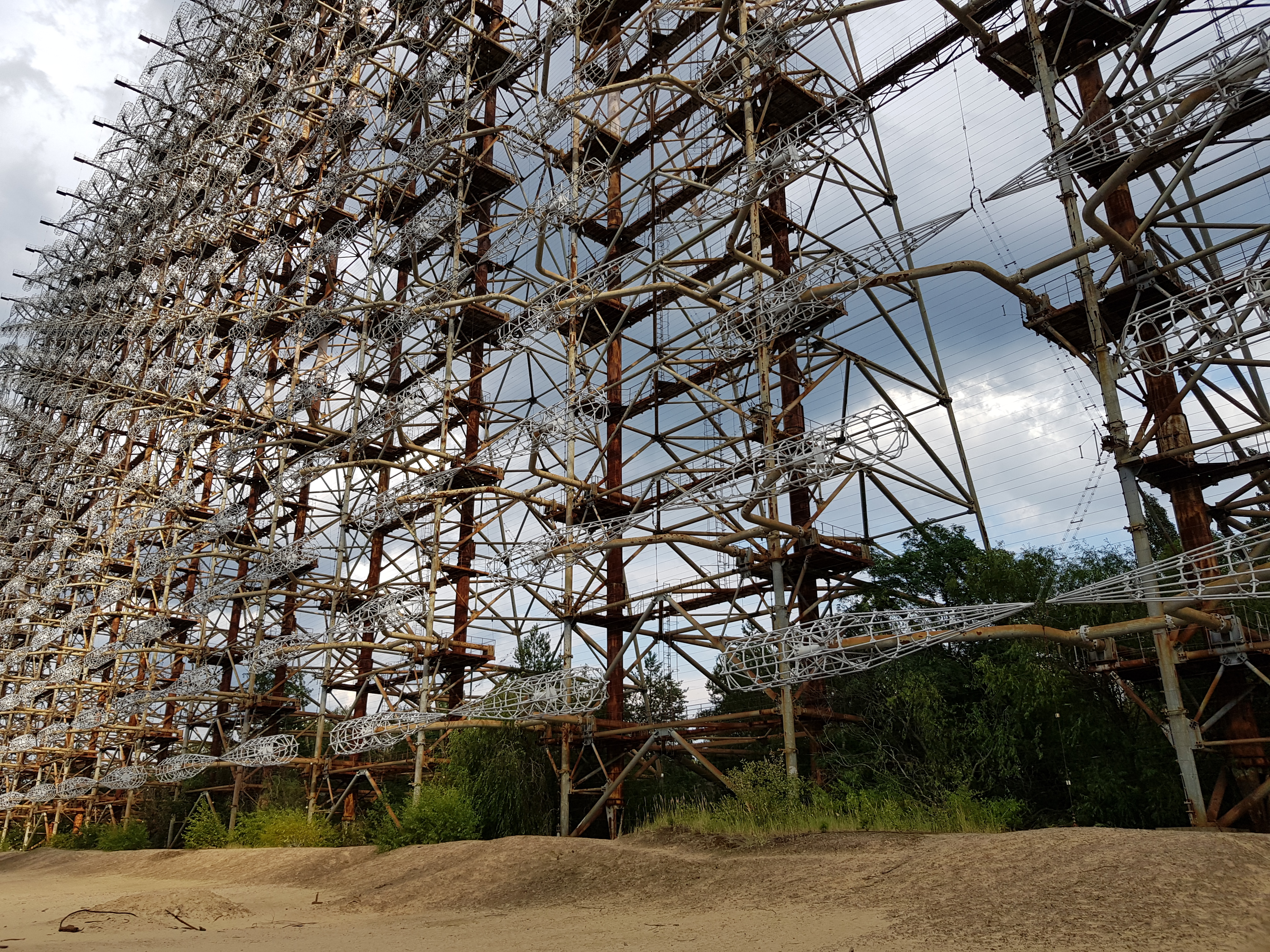 New Safe Confinement and the view of ChNPP

From the observation deck of the nuclear power plant, you can see in detail the sarcophagus that covers the building of the fourth power reactor. This is a unique structure with a height of 110 meters, designed to preserve the strong radiation background of the Chernobyl nuclear power plant, which allows you to protect the surrounding area from radiation. 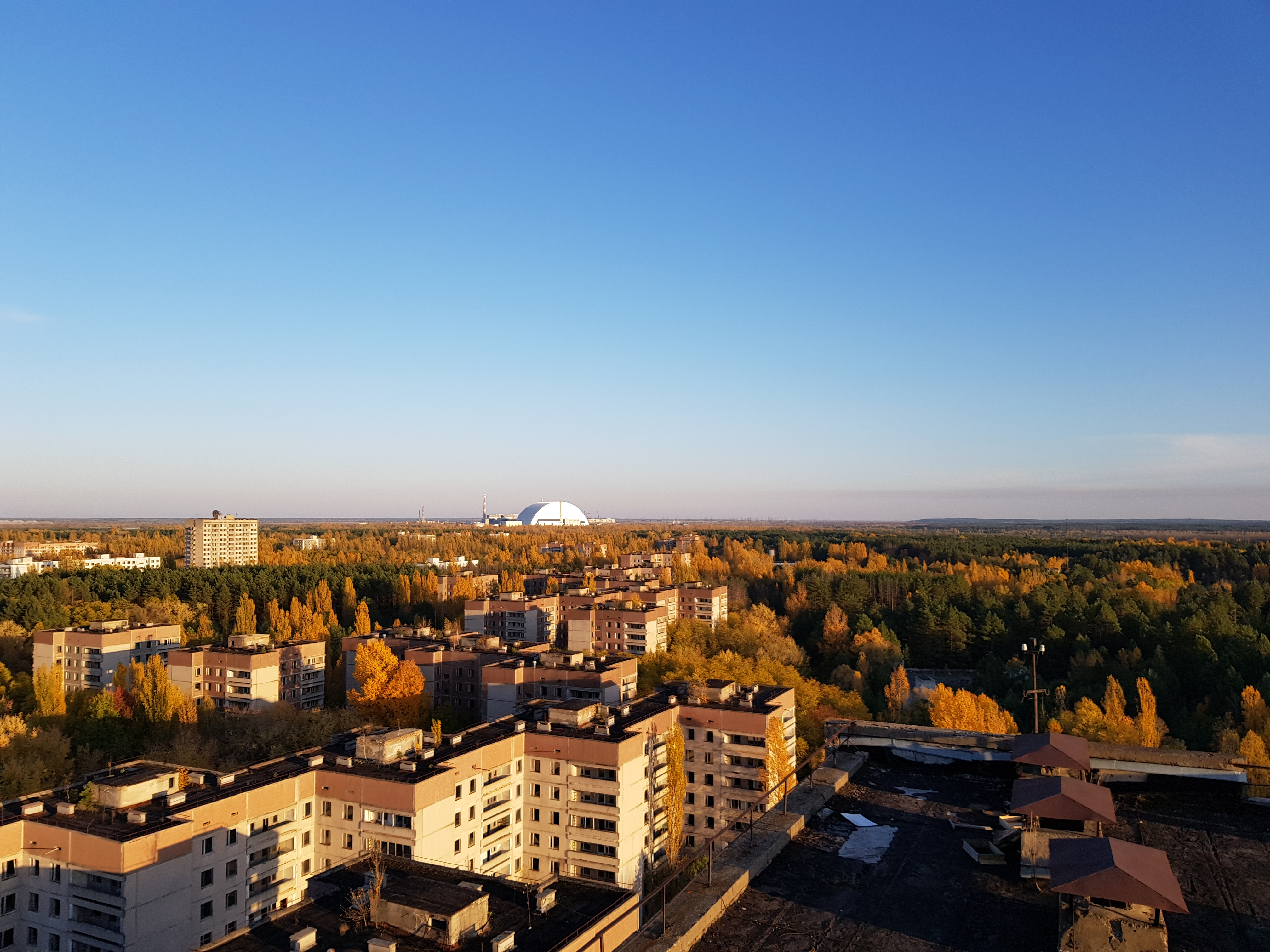 These are giant cooling towers that are used in nuclear and thermal power plants. These huge structures (over 90 m) were supposed to cool the fifth and sixth Chernobyl units. However, after the disaster, work at these facilities was stopped.

Another feature of the exclusion zone is the diversity of the animal world. When people left the territories affected by radiation, nature quickly recaptured their possessions. Now in the local forests, you can find bears, otters, badgers, muskrats, lynxes, deer, Przhevalsky horses, wolves, and other rare animals that have not been seen here since the early 20s of the last century.

To get an idea of the Soviet stores of the 1986 model, take a look at one of them in Pripyat. Old cash registers, surviving cases of lamp TVs, semi-automatic washing machines, the remains of counters are mute eyewitnesses of events.

Red Forest is a section of the pine forest near the ChNPP. The trees took on a powerful impact of radiation, which painted needles in brick color and turned into a "rusty" forest.

The rusty forest was essentially a time bomb, since, for example, in a fire, it could serve as a source of secondary radioactive contamination.

Therefore, it was decided to bury part of the most radioactive wood. Over time, the ecosystem began to recover and young pines began to grow in this place.

However people left these places 34 years ago, but life goes on: stormy grasses have destroyed borders and roads, and wild dogs now hardly differ from wolves.

Today, 34 years after the accident, the Pripyat exclusion zone has become a real nature reserve. There live bears and bison, there are wolves, wild boars and horses of Przhevalsky - and many other animals, not counting a couple of hundred species of birds. The installed traps with video and cameras allow us to say that such rare species as the elusive Eurasian lynx (the last time it was seen in this place more than a century ago) began to appear in this special zone.

What is more, researchers were surprised to find that the high level of radiation remaining in the Red Forest practically does not harm the wildlife of the Exclusion Zone.

Of course, there are still some deviations. For example, among birds there are often albinos, the life span of insects in the "dead forest" is shorter than outside, and rodents give much less offspring.

The station is surrounded by an area of 2,600 square kilometers which remains mostly uninhabited and closed to visitors without special permission.

To keep most of the radiation inside, a concrete sarcophagus was hastily built over the fourth destroyed block, but from the end of 2010 scientists began work on a more permanent solution.

In November 2016, an event occurred at a stopped Chernobyl nuclear power plant, described by almost all the world's media. A hundred-meter arch was built over a concrete sarcophagus, under the 4th reactor, destroyed by the explosion, rests. The new safe confinement weighs 30 thousand tons and is visible at a distance of several kilometers. It creates an armored corps that blocks the spread of radiation. Currently, the power plant employs about 1,500 employees.

Radiation in Pripyat is twice larger than the normal level which means today Pripyat is quite safe for short visits.

"Previously, mostly scientists and journalists came; now 80 percent are ordinary visitors. To come to the exclusion zone is like visiting a museum dedicated to the Soviet Union," the guide says.

Today if you want to spend a weekend in Pripyat, you need special permission, transport, a dosimeter, a special guide that will take you from one place to another. That is because moving without the guide and on foot is forbidden in the exclusion zone. Although getting to the zone is not that easy. The administration of the Chernobyl exclusion zone issues permits documents only to service stuff and tour operators who have licenses for this purpose. It is also prohibited to visit the exclusion zone for persons who are not 18 years of age and pregnant women.

The Real Chernobyl provides exclusive tours to Pripyat, Ukraine. Group tours, private tours, and air excursions are available at good prices. You can book the tour, calculate the price, contact us, and find out all the information you need.