34 years ago, there was a terrifying technogenic accident in the fourth reactor of the Chernobyl nuclear power plant. On 26 April 1986 at 01:23:45, at the ChNPP, one reactor exploded and a huge amount of radioactive material was released into the environment. The level of penetrating radiation was extremely high and mortal - about 1,500 x-rays. The fire on the roof around the exploding reactor was extinguished only on the 6th of May. In these terrible days and later, the mobilized military extinguished and removed from the roof of the fourth power unit broken pieces of pipes with nuclear fuel, graphite, and other... Each liquidator, each rescuer, being in contact with the wreckage, was irradiated in 30-60 seconds at a dose of 40 rem or more (25 rem is the maximum permissible exposure per year).

Where Was Chernobyl Filmed

The movie copes with one of the worst technogenic human-made disasters in history and sacrifices made by brave men and women to save Europe from unimaginable destruction. A radioactive catastrophe that happened in the USSR, its consequences, people surviving, government attitude, and the hidden side of the Soviet Union.

Most of the episodes were shot in Lithuania, but some of the locations and actors were Ukrainian.

The TV series "Chernobyl" received many positive reviews about the detailed reproductions of life in the Soviet Union in the '80s.

Cars and clothes, hairstyles, and interiors were to be not just as in the USSR in 1986.

To find authentic locations, the filmmakers went to countries with Soviet history. They thought about Ukraine as a place where everything happened in the first place but filmed the better part of it in Lithuania.

However, you can find out the Ukrainian places in the film.

The episode, which lasted 5-7 seconds in the series, was filmed for 7 hours. The whole crowd shot was Ukrainian. And that time we did not know that this series was filmed by HBO," Pantelyuk. 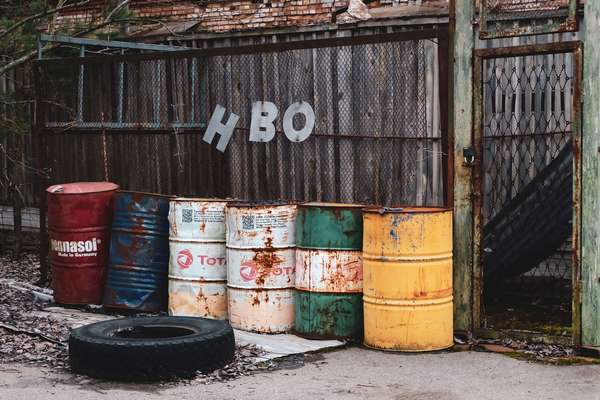 The view of the Kyiv Sea (Kyiv Reservoir) and the city of Pripyat also appear from Ukrainian locations in the TV series.

In Ukraine, the movie "Chernobyl" was filmed for several weeks. The shooting was provided by the Ukrainian company Radioactive.

In Kyiv, the filmmakers shot the movie on Podol, and Obolon - at the Institute of Hydrobiology, on the streets of Tereshchenkovskaya, on Khreshchatyk, the buildings of the Kyiv State Administration, the building of KPI, NAU and Taras Shevchenko National University.

Although most of the full-length filming of the series took place at the Ignalina Nuclear power plant in Lithuania, which has reactors of the same type as Chernobyl one. The footage from the Chernobyl nuclear power plant in the series is the work of the Kyiv studio Postmodern digital. Views of the station, the area around it - this is a computer model, which was created in 2013 for another series about Chernobyl - "Butterflies" and HBO used Ukrainian computer graphics to refine it.

The main characters of this film are real people who liquidated the consequences of the radioactive disaster.

Behind each name is the real destiny of man. Who are these people and how did their future life turn out?

There is only one fictional character in the HBO series - nuclear physicist Ulyana Khomyuk. This is a collective image, which embodied the entire team of scientists working to investigate the causes of the accident. The series shows the stories of real people who were at the epicenter of the accident and took part in the elimination of its consequences.

How much were fact and fiction

The truth shown in the series turns out to be stronger than the dramatic assumptions. The soldiers were indeed ordered to kill the pets that remained in Pripyat after the evacuation, otherwise, they would have spread the infection further.

Graphite from the roof of the reactor was dropped by the hands of hundreds of soldiers in chemical protection suits - because the robots created for this purpose stopped working. Firefighter Vasily Ignatenko and his pregnant wife Lyudmila had to leave for Belarus the morning after the accident. But when he heard the explosion, Ignatenko rushed to the reactor in the middle of the night. In order to get to her husband in the hospital, Lyudmila lied about her pregnancy. She was forbidden to hug him, but she did not listen to them. Vasily was buried just two weeks after the catastrophe in a zinc coffin in a common grave with his comrades (and filled it with cement). To dress her husband, Ludmila brought shoes from home, but the shoes did not fit on the swollen feet. Eight months later, the woman gave birth, but the girl died after four hours. The doctors told Ludmila that she would never have children - and yet later she had a son. A plot with a dead baby is a dramatic move that cannot be created on purpose. The fate of this girl is a symbol of a stillborn country, a metaphor of how an unviable future from the unfinished past.

Even if a movie based on true events there is a lot of mismatch with reality. Therefore, as it usually happens in the entertainment industry in order to touch peoples` hearts, Jonah Renk decided to change the scenario. He made it much more dramatic, much more terrifying and spooky to show how serious this problem is up today.

Firefighters, as well as station operators, put out the fire in many places that night and they were afraid that the fire would spread to the next block and go on. But a fire on the roof is a myth. There was no fire, as the firefighters and the operators say who were there say. There were local flame developments, they were quickly shot down.

In the matter of diving into the reactor. There is a meeting described in the film, where volunteers were required, did not exist at all. This work was planned in advance.

"The fact that it is necessary to remove water from under the reactor was decided somewhere upstairs, the task was lowered to the government commission, it was to the management of the nuclear power plant, and it was to replace Ananenko, Bespalov, and Baranov ..." - says Aleksey Breus, "They were not volunteers - they were told what was necessary [...]. Of course, they did not have scuba diving or bathyscaphe. There was a transparent plastic wetsuit, heads open[...]".

"I remember how after that in the pioneer camp "Fairytale" in the Chernobyl zone, where the staff was taken from Pripyat, the order of the director on awarding Baranov, Bespalov, Ananenko for the accomplishment of the especially important task was hung out on the stand - they were allocated 80 rubles" - remembers Breus.

As opposed to the plot of the movie, pitmen did not walk naked, but they took off their respirators and were a little undressed.

Comparing the episode with a glow after the explosion with film and reality - there was no big flame at night. The next day, certain physical processes took place inside the destroyed reactor, which gave light, but it was not a fire. There were not lots of crowd people watching at a glow at night.

"Indeed, no one knew how to act.

We, the operators, the station management, the officials, Gorbachev - no one knew, because this has never happened before" - said Breus. "As for the characters of the key personalities of the Chernobyl disaster, such as director Bryukhanov, chief engineer Fomin, deputy chief engineer Dyatlov - in the series it is not an artistic convention, but simply a lie."

The film showed that the operators rescued the victims, investigated the condition of the reactor and the level of radiation, as well as tried to supply water to the reactor.

"But they did not show that they also put out the fire, provided water to firefighters and tried to prevent new explosions and fires." - admit Aleksey, "And it was hard and important work that took the lives of operators".

Come and See Chernobyl with Your Own Eyes

Despite a movie based on real events as much as possible - there are still some details that will not convey those events authentically. The atmosphere of the TV series is shown as close as possible to that time - but this is not what you can see with your own eyes in Chernobyl. When you are there - you seem to make a jump back in time - because, in the Chernobyl Exclusion Zone, the time has stopped. You can understand the scale of the human-made tragedy in more detail only by going there and seeing everything with your own eyes. Real Chernobyl will provide you with such an opportunity. With the company, you can see everything as accurately as possible and experienced guides will show the most important locations, tell you what was not in the series in an accessible language.